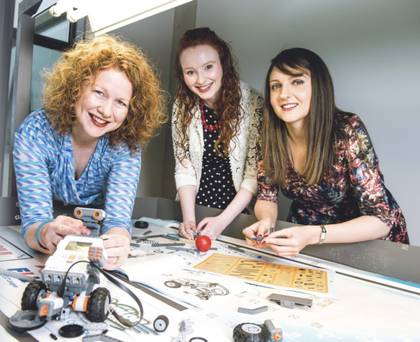 For the team at Specialisterne NI, ‘playing’ with Lego is all in a day’s work, a social enterprise recruitment consultancy that pairs people on the autistic spectrum with highly skilled jobs in the burgeoning IT sector.

The tiny bricks and complicated build of Lego makes it a perfect assessment tool to see how job candidates work together and use their skills and abilities.

Specialisterne NI manager Sharon Didrichsen said: “This innovative model that we developed ourselves replicates a work-like activity – that of building and programming Lego Mindstorms Robots in small teams, which is used in addition to the traditional interview, to see candidates’ skills and abilities, as well as any areas of support.”

Specialisterne NI has been recruiting locally for market leaders such as Total Mobile, Intel, Tascomi and JMG Systems since it was set up last year to match talented people on the autistic spectrum with IT roles.

The Northern Ireland team now consists of three consultants who have all studied autism to Masters level and they represent over 120 talented people on the autistic spectrum for employers in IT and other sectors such as finance, manufacturing and legal sectors.

Specialisterne is a Danish word meaning ‘specialist’ and highlights the skills that people on the autistic spectrum offer an employer. Specialisterne started in 2004 in Denmark when Thorkil Sonne, an IT manager at TDK Telecom, noticed that his young son Lars, who had a diagnosis of autism, could reproduce the index page of map of Europe from memory.

Thorkil was amazed at his son’s memory and saw this as useful for software testing roles.

He started a company based on the idea that certain features such as attention to detail, pattern recognition and logical thinking may be at a higher level among the autistic population. Specialisterne, now in 12 countries, has the aim of one million jobs for autistic people.

Like Thorkil, Sharon Didrichsen’s journey took a similar route. When her two -and-a-half-year-old son was diagnosed with autism in 2009, she was determined to learn everything she could about the condition.

She left a job managing recruitment campaigns for Northern Ireland’s leading software houses and headed to Queen’s University to get a Masters degree in autism.

It was then that she heard about Specialisterne and it seemed the perfect fit – her first-hand knowledge of autism paired with her skills as an IT recruiter.

She understood both worlds and with determination she set about persuading the company to set up an independent branch of Specialisterne in Northern Ireland.

“I noticed that my son had certain qualities at a higher level than was expected from a child of his age. He could build adult Lego kits in short periods of time and could pay attention for long periods and was meticulous in accuracy,” she said.

Those qualities in a person are incredibly useful in IT jobs and as the sector was growing rapidly here, companies were crying out for skilled staff.”

The company has developed good relationships with IT firms and other sectors, delivering training as part of a ‘Working with Autism Framework’. In its first-year Specialisterne NI delivered two government pilots supporting the Department for Employment and Learning and Invest NI Software Test Academy and organising a flagship event for the Arts Council Creativity Month, which focused on the business benefit of diversity.

Future plans include pre-employment initiatives for young people on the autistic spectrum.

In the autumn, Specialisterne is launching interview training for employers in response to requests from companies to be able to identify talented people who may not fit the expected presentation and yet have the skills for a job, and will be launching a new recruitment website, www.specialisterneni.com which has been developed by AllState NI as a community initiative.

As published in the Belfast Telegraph on 22nd July 2015.

Want to join the discussion?
Feel free to contribute!

What does Lego have to do with getting a job?